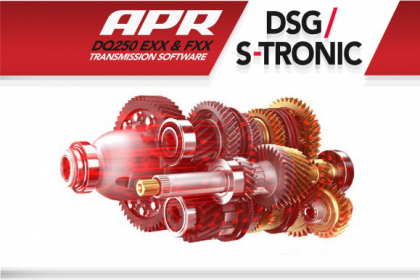 APR is pleased to present the ultimate transmission control unit (TCU) upgrade for the DQ250 Exx & Fxx DSG and S tronic transmissions! APR’s TCU upgrade is available in engine and power level specific variations and is conveniently flashed to the vehicle’s factory TCU through the OBD-II port. APR’s patented DirectPort Programming Suite allows the end user to customize the TCU upgrade to their individual needs.

APR’s TCU upgrade enhances the driving experience by incorporating many of the same features typically reserved for high-end Audi Quattro GmbH RS models. Under blistering, wide-open throttle acceleration, the transmission shifts even more quickly than before with a higher rev limit. However, during normal, day-to-day driving, the TCU Upgrade delivers a smooth, more refined, driving experience. APR’s DirectPort programming suite allows users to custom tailor the TCU upgrade to their needs at the time of installation. Users are given the following options, which they may change at an APR dealer at any time:

APR will adjust any mismatch between Engine Control Unit (ECU) and TCU max RPM or standing rev limters, should any conflicts arise.

Drive mode’s performance and comfort is greatly improved based upon the current stage of engine performance. Gear change upshift and downshift points occur based on engine load and throttle position, rather than hard set points, and as such occur more smoothly and less abruptly. The driver may feel more connected to the vehicle as the gear changes occur more naturally. Under part throttle driving, the transmission will stay in the current gear until the appropriate moment necessary to shift, rather than jumping to higher gears too quickly. This is especially true for calibrations geared towards larger turbocharger systems where response characteristics of the turbocharger changes the part throttle driving experience. Under wide-open throttle acceleration, shifting times are reduced and the maximum shift point RPM is set to the ECU’s rev limiter.

Part-throttle drivability is greatly improved too. Some factory DQ250 transmission software is too aggressively geared towards holding high RPMs, and often uncomfortably downshifts when unwanted. Under low accelerator pedal position, low load driving, gearshifts occur earlier, allowing the driver to enjoy sport mode even during those moments when wide-open throttle operation is not permissible. However, should the driver request more torque with his or her right foot, the transmission comes alive in the true spirit of sport mode!

The ECU defines the maximum engine RPM possible. Using APR’s user definable max RPM settings, the end user can match the ECU’s RPM to the TCU RPM to avoid hitting the engine rev limiter should the automatic redline upshift option remain active. In the case where an APR ECU Upgrade’s redline is lower than expected, APR can issue a free ECU update to correct the max engine RPM.

During manual mode shifting times are not only greatly improved, but the artificial delays between requesting a shift with the paddles and shifter are reduced as well. As soon as a shift request is made, the transmission instantly begins the shifting routine. Furthermore, the downshift lockout is removed, allowing the operator to downshift at any point, so long as the next gear does not surpass the max engine RPM.

With manual mode tailored to the end users need, they are presented with a more enjoyable driving experience that operates exactly how they choose. We call it Performance Without Compromise!

APR’s TCU upgrade enables launch control on all vehicles. At the time of installation, the user is able to select their desired launch RPM, as they see fit! Launch control activates quickly, with a wider operating window, by limiting some of the stubborn activation criteria some models face during activation. The end user will notice launches now occur more rapidly with less delay between releasing the brake and forward momentum. The clutches fully grab quickly off the line and shift times are reduced. This directly translates into faster acceleration!

APR will adjust any mismatch between Engine Control Unit (ECU) and TCU standing rev limters, should any conflicts arise.

*Please Note, the vehicle must be equipped with a traction control button to enable launch control.*

All too often TCU upgrades are sold as a solution to “torque limiters” in which many companies charge extra to raise. While some companies may have trouble with torque interventions from the transmission, even at stage I power and torque levels, APR ECU upgrades do not require a TCU upgrade to meet advertised peak torque levels. APR does not charge extra to “raise the limits.” Raising the limits does not increase performance and does not increase the transmission’s ability to hold more torque. The maximum torque limiters are simply removed, allowing customers unrestricted operation. In the event torque is limited by the factory clutches, upgraded units may be installed and torque may be increased without TCU intervention.

Temperature management is an important part of the DQ250 transmission. While some software may simply remove temperature protection routines all together and claim increased cooling performance, APR’s TCU upgrade only allows the maximum safe temperature levels before intervention. Unlike the factory intervention routine, which simply allows for nearly no torque to be transmitted through the transmission at all, APR’s over temp intervention allows for a very limited amount of torque, enough so the vehicle can be safely driven off the track or pulled to the side of the road. In keeping the vehicle moving, airflow continues across the radiator, which in turn keeps coolant temps low and aids in removing heat from the factory DQ250 water to oil cooler to restore full operation.

Please note APR’s TCU upgrade is for the Temic Tricore based Exx and Fxx transmissions. Earlier Power PC based Cxx transmissions as found in vehicles such as early K03 based EA113 2.0T’s and older 3.2L VR6’s greatly differ in their features, capabilities and TCU complexity.

APR TCU Upgrade Creation:
APR’s engineers have taken a direct and custom approach to calibrating the TCU. All too often others create a generic calibration that is forced across a wide range of different vehicles and transmission versions. Unfortunately this generic method of copy and paste tuning can result in some undesirable effects, such as slow up shifts and downshifts, torque interventions, stumbling and immobility. In some extreme cases, damage to the transmission can occur. With hundreds of factory TCU variations available for the DQ250, APR’s engineers have painstakingly ensured every TCU upgrade is created using the transmission’s original file to ensure the ultimate experience!

APR DirectPort Programming:
APR’s patented DirectPort Programming is now available for the Temic Tricore Exx and Fxx DQ250 transmissions. Any APR Dealer in the world, connected to the Internet, has direct access to APR’s latest TCU upgrades for installation directly over the vehicle’s OBD-II port. This completely eliminates the need to remove and open the TCU and can be uninstalled at any time!

APR TCU Composer:
APR’s proprietary TCU Composer is used for altering the transmission management system. With full access to every table, map and variable within every TCU, APR’s Calibration Engineers are not limited to the handful of pre-defined maps as is common for most tuning companies.

APR TCU Assembly:
APR’s Electrical Engineers have the ability to alter the code structure of the TCU. Through code levels changes, APR’s Engineers are able to add future features to the TCU otherwise impossible through calibration changes alone. 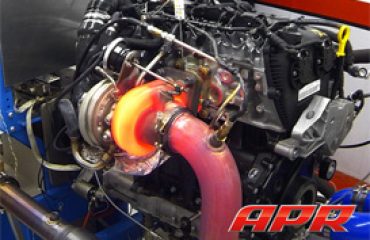 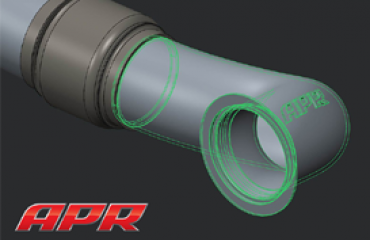